This article will answer the following question: “Is iron filings flammable?”. We will also discuss some of magnetism history, what is a magnetic field and present some Safety Data Sheets for the material.

It depends on the size of the iron filings particles. Some Iron filing products are flammable, some are not even considered combustible.

Although, the product can only burn if a direct source of ignition is applied to it. The product doesn’t become airborne easily because of its high melting point.

What are iron filings?

Iron filings are small pieces of iron. It comes in a powdery form and is usually used in Science Education, to demonstrate how a magnetic field works.

It can also be used in DIY art pieces to create a rust effect, to compose fireworks, as a chemical reactant, and materials such as ferrofluid liquids.

Iron is a chemical element. It’s the most common element of Earth’s crust, by weight, and can be found naturally in the form of minerals.

Iron is a solid metal that can be found naturally in the form of ores or crafted into many kinds of alloys.

Pure iron is normally obtained through chemical reactions, it can rarely be found naturally.

Iron is tough, friable, and fusible. It is used to produce other alloys. Steel is the most important commercial iron alloy.

Forged iron contains only a few percent of carbon, but it enhances its durability, fracture resistance, and strength. Many other things can be added.

Pure forms of iron can’t really be found naturally in Earth’s crust. Although pure iron is common in meteorites, so we can find pure forms of iron that “naturally” came from extraterrestrial sources.

Steel is an alloy made with the addition of other minor compounds like manganese, nickel, sulfur, titanium, phosphorous, tungsten, cobalt, and niobium.

Stainless still is typically made with an additional 11% chromium, making the material oxidation-resistant.

Iron is known since prehistoric times, at least 5 thousand years ago. It is the cheaper and most abundant of all metals.

Before we proceed we must explain a few important properties of iron and some chemistry. We promise it won’t be long.

Iron is a chemical element, an atom. All atoms humanity has found or created are expressed in the periodic table.

The periodic table is just a convenient way humans found to write about atoms. Every atom there has a neutral charge, meaning that they have no excess or lack of electrons.

In the picture above you can see an atom of iron and its place in the periodic table.

The way an atom is written in the table is not exactly the best, more common, or more stable. It’s just a representation that old scientists chose, considering all of them have a neutral electron charge.

But iron exists in a pure form, just like in the table, bonded with other twin irons. These are the forms that can burn, they react with air’s oxygen to produce iron oxides.

All those green balls are the 26 electrons iron has. These are the particles that participate in chemical reactions. An atom nucleus is never touched unless there’s a nuclear reaction happening.

When for some reason an iron loses two or three electrons, it becomes a cation named Iron(II) or Iron(III) [Fe+2 or Fe+3]. This can happen in an aqueous solution (the cations become a free species), or in a molecule, especially oxides.

The magnetic properties of iron minerals were already known in Ancient Greece.

More than 3 thousand years ago, the Chinese already knew that a needle of magnetite always pointed to the same place, and used it to navigate.

In the 1600s, a physicist and philosopher called William Gilbert published a book called De Magnete, explaining how Earth itself could be considered a big magnet.

Today we know that Earth’s magnetism comes from Earth’s core, due to the movement of magma, which creates electrical currents. These same electric currents induce magnetic fields.

What is a magnetic field?

We can think about a magnetic field like existing points in space where something metallic can interact and compare it with the result of how positive and negative poles attracts one another. 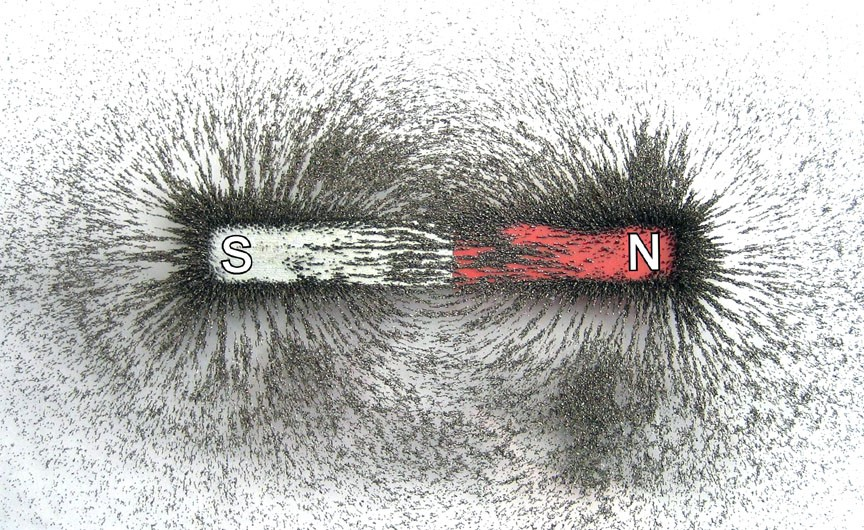 A magnetic field is a series of lines that by convention comes out of the north pole, into the south. In the picture above, iron fillings were poured around a magnet to make these lines visible.

The magnet field exists whenever there’s a magnet. Powdered iron only makes it visible.

You may have already tried rubbing a pen or comb in your hair and then passing it through small pieces of paper, to attract them.

The same thing can happen using a balloon, and you can glue it on the wall for a few moments.

This happens due to static electricity, which is nothing more than inducing temporary opposite charges in the hair and plastic. The plastic becomes then electricized and can act as a magnet.

Magnets act like polarized particles, but they have no charge. Permanent magnets like magnetite have naturally a “more positive pole” on one side, and a “more negative” on the other extremity.

Although magnets never have only one of these sides, they always come in pairs. So if you break a magnet in half you will end up with two magnets, never a more positive or negative one.

How flammable iron filings are?

Iron filings are basically small pieces of pure iron. It can become more or less flammable depending on the particle’s size.

Each iron filing material has its own sources and processes of manufacturing, so its particles can be presented in different sizes.

The more finely divided the iron particles are, the more surface area it has. This means that the area where the chemical reaction would happen is bigger, and more molecules can react at once.

Each molecule that reacts liberates some energy in the form of heat, and it’s absorbed not only by the surroundings but by the other molecules that haven’t yet burned.

Since the iron particle can oxidize (burn) more easily when it’s warm (because oxygen gets more readily available in the reaction), the result of the initial ignition is a chain reaction.

It’s important to say that iron has a high ratio of heat transference, it can heat easily, a property that facilitates its burning.

This way, iron can burn under mild conditions when a source of ignition is provided to it because the heat of the initial combustion “is propagated” through the fuel itself.

The iron filings can liberate energy upon burning. Let’s analyze how big this energy liberation is.

Iron filings can oxidize and liberate energy in the form of heat, so they can be considered flammable. But what does it takes for something to catch fire?

If you burn iron powder, it would happen quickly. There wouldn’t even be much time to extinguish the reaction.

For comparison, a glass of gasoline burn as much as 1.35 kilograms (around 3 pounds) of iron powder.

It can become a fire hazard if direct flames are applied to it, or if you possess a big amount of iron to be burned, for example.

Also, iron powder burning depends on the size of the particles. Bigger particles would be less flammable because has less surface area to participate in the chemical reaction.

Since the reaction is quick, the powder can be ejected all around if there’s a big enough iron pile. This means that iron powder can fly around and ignite other things, and that’s the biggest hazard.

Eventually, an iron particle is too big to become flammable, and the flammability hazard extinguishes. No iron bar is considered flammable.

At the same time, iron must before be ignited itself so it can ignite other things, so it’s not a big threat.

How flammable iron fillings are?

We can check some safety data sheets to make sure how flammable several iron filling products are, according to each manufacturer.

The particle sizes are considerably large, so the product is not considered hazardous for transportation when it comes to fire.

Carbon oxides and other toxic vapors may be formed during the combustion of this product, but it’s not considered something that would start a fire on its own.

According to the manufacturer, it’s a nonflammable solid. But it might emit acrid fumes if heated until decomposition.

The more fine-divided the iron filings particles are, the more flammable they’re going to be. If for some reason the product is made of stainless steel, no flammability would be expected.

Is iron filings a mixture?

No. Iron filing is a pure form of iron. It might contain a few impurities but it is not made of a mixture of things.

It’s important that the product is made from a single compound, otherwise, the particles would be attracted to a magnet unevenly, prejudicing experiments.

Yes. Iron fillings are made of pure iron, which can be attracted to a magnet. Iron filings are used to denote what the geometry of a magnetic field looks like.

is iron filings soluble in water?

No. Iron is not soluble in water, alcohol, and alkali solutions. It is soluble in strong acids.

What was missing from this post which could have made it better?

Your feedback helps us improve the quality of these articles.

No comments to show.